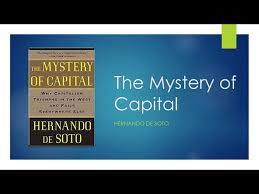 Those who depend on unrestricted capitalism for their power, wealth and position in society will want you to resuscitate it by sacrificing the welfare, comfort and even the lives of ordinary people. They will claim that such failure (which they will call recession, depression or even crisis, but never failure) is, to quote Safire, as necessary to the economy as breathing is to an animal. This only shows how narrow their mindset is, how willing they are to condemn millions of people to periodic misery for the sake of retaining or improving their own chances of acquiring their own wealth.

They will assert that only democracy in the service of the markets, which is what they have had for the last 3 decades in the US and Britain, is compatible with well-being.

They will claim that having markets serve democracy always leads to poverty and is anyway tantamount to serfdom.

They will expect you to continue to propagate the myth of trickle-down even while they sit on mountains of inequality, having themselves appropriated the bulk if not all of used to be called the peace dividend.

They will have the cheek to demand that the state rescue their failed enterprises so that they can continue to pocket gargantuan bonuses and salaries while telling the poor and the unemployed that personal responsibility is all and that they only have themselves to blame.

And almost all of them will want you to resuscitate the failed Reagan-Thatcher system of a business-led society and democracy in the service of wealth and markets, with no redistribution and minimal taxation, preferably falling on some if not all of the poorer people.

Resist them, Mr President. You have been a community organizer and are very familiar with the concept of class. You will know that the business class has greater class solidarity than any other – the fear of the slightest condescension at the country club can turn them into rabid union-busters if they are not already. They must not be allowed to lead society nor to have great influence over it, else democracy dies of ineffectiveness.

You will need a good economic team. When selecting that team, keep in mind that Reagan-Thatcher has failed and that it is unlikely that developers, promoters and supporters of that system, which can be described as casino capitalism, can be of help now. On the other hand, there are two recent American Nobel winners who have been steadfast critics of Reagan-Thatcher and of the economic shock therapy which caused so much misery in Eastern Europe and Latin America.

One has to be skeptical of the Washington Consensus institutions: the World Bank, the IMF and the WTO. They may, in some cases, have promoted gross growth, but little of that has been seen by most of the populations of the developing countries – most has gone to the further enrichment of elites. Based as they were on the failed ideals of unregulated markets in any case, these institutions and their policies need review and radical restructuring, in order to make them help people, not countries.

You have been compared, superficially, with John F. Kennedy in 1960. But the situation today is much more like the one that Franklin Roosevelt faced when elected – a failing economy – and in many ways worse because of the two wars and the absurdly named War on terror started by Bush and his business supporters. Radical rethinking of American society is needed, and I believe that can only lead a democracy served by markets where markets are needed, rather than the reverse, an economy democratically planned to protect citizens from poverty and exploitation by excessive competition, redistribution at least to ensure that inequality of outcome in one generation does not cause inequality of opportunity in the next, political influence of labour at least equal to that of business, freedom for the democratic government to business itself, as in WPA, and economic arrangements such that warmongering is profitable for no-one. The situation calls for change at least as great as Roosevelt's which will, no doubt, attract resistance and opprobrium at least as intense as what Roosevelt faced.

Good luck, Mr President. My hopes are with you. The long nightmare of triumphant neo-conservatism may finally be over.
Posted by Erizeli Bandaro at 5:40 AM No comments: