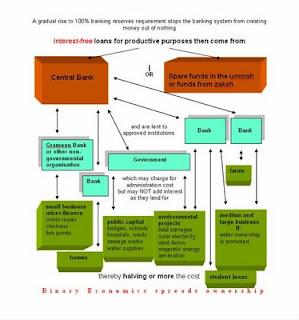 The fundamental cause of the global financial crisis now manifesting itself in various ways is a banking system which:-a) creates money out of nothing) adds interest (as distinct from administration cost)c) directs it at anything except the development and spreading of the ownership of productive (and the associated consuming) capacity so as to achieve a Say’s Theorem balance of supply and demand with producers and consumers being the same people while, at the same time, forwarding social and economic justice.

Because only enough money is created for the principal of a debt but not for the interest which must be paid, more and more interest-bearing debt must be created if the system is not to collapse. But, as the amount of interest-bearing debt continually rises, not only is the debt hugely increased (with consequent massive systemic instability) but inflation is continuously created.

The instability is compounded by the newly-created money not being put into the development and spreading of productive capacity. Thus the USA, putting the interest-bearing money into anything except productive capacity, has in practice hollowed out its economy which, of course, exacerbates the effect of the huge, mind-boggling, debts.
The solution can be summarised as the issue of national bank-issued interest-free loans (administered by the banking system) for the development and spreading of productive (and the associated purchasing) capacity to all individuals in the population. All environmental capital projects, all governmental capital projects, micro-credit, small business, student loans and the private sector if wide ownership is involved are covered by the solution.

At the same time as the national bank loans are issued, the banking system must be curtailed in its present ability to create money out of nothing and lend it for any purpose except the development and spreading of productive capacity. The curtailment can be done by a rise to 100% banking reserves.

At the core of the solution is the use of interest-free loans issued by the national bank for the purpose of productive capacity. Such loans cannot be inflationary, indeed, they are counter-inflationary ─ when the loans are repaid, they are cancelled leaving behind in the economy productive, income-generating capital assets. Thus productive assets always back the currency.

Crucially, the loans originate with the national bank. By originating the money with the national bank (rather than the banking system) society’s ownership of the money supply is established and so the money can be interest-free and focused on the purposes of productive capacity and the real economy so as to achieve a Say’s Theorem balance of supply and demand while, at the same time, forwarding social and economic justice.
Thus it is proposed that a country’s national bank should create interest-free loans. On repayment, the loans (like the principal of normal bank loans) are cancelled leaving the capital projects in existence. The money for repayment of loans is collected and repaid as it is at present except that the capital projects would cost, roughly, half, even a quarter or less of what they cost today.

The collateral for the loan would be similar to that today e.g., either secured on the project itself or on the repaying power of the government and its administrative systems. Essentially, the government would be repaying itself thereby removing creative liquidity which has fulfilled its function.

In the past the mechanism has been successfully used for public capital projects in Canada, New Zealand, China and Guernsey and is believed to be being used in Malaysia today for some big public capital projects. Gradually, over time, the banking system (by an increase in required reserves) would be increasingly restricted in its own creation of money unless such creation demonstrably spreads productive capacity and assists sustainable development.

While the supply of interest-free loans (originating with the national bank) increases, there needs to be, at the same time, a decrease in the present ability of the banking system to create money out of nothing. This would be done by, over time, a gradual rise eventually to 100% banking reserves (which effectively ends the ability of the system to create money out of nothing). The banking system would, of course, still be able to lend its own capital and (with permission) the deposits of customers.
Posted by Erizeli Bandaro at 3:04 PM