Trump's save by Russian Gangster 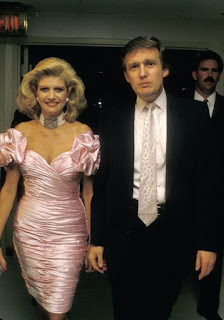 At a meeting in front of bankers, Trumps appeared highly confident. He rhetorically cornered them in order to reschedule his debt settlement of USD 1.5 billion. In the fall of 1992, they accepted with a note. Trumps must sell all of his personal assets, including luxury yachts and private jets. He is also prohibited from being directly involved in the day-to-day management of his company. This means that the company is under the supervision of bank creditors. After that Trumps threw a big party for himself in Atlantic City to announce his comeback. At that time the name Trumps was very famous. His name is aligned with the celebrity world star. Party guests were given sticks with Trump's face glued to them so they could be photographed posing as famous real estate moguls. As the theme music from the Rocky movie filled the room, a host shouted, "Let's hear it for the king!" and Trump, wearing red boxing gloves and a cape, broke through the paper screens. One of his casino executives announced that his boss had returned as a "winner."

But that's just acting. Actually Trump is bankrupt. No more business community wants to do business with him. Bankers have blacklisted him. Because many times Trumps threatened them. He will take refuge from Chapter 11 of the bankruptcy law. Once a banker feels threatened it is bad news for others. Besides, in front of his big family his reputation is bad. Since the early 1990s, he has used up part of his father Fred's fortune on a series of frivolous business decisions. Two of its businesses have declared bankruptcy, the Trump Taj Mahal Casino in Atlantic City and the Plaza Hotel in New York, and the money pit which is the Trump Shuttle went bankrupt in 1992.

During the rest of the 90s, the plagued Trump did little to launch any major new business ventures (with a few exceptions, such as the Trump World Tower across from the United Nations, which began construction in 1999 and was financed by two German lenders, Deutsche Bank. and Bayerische Hypo- und Vereinsbank). “He took about 10 years off, and really like licking his wound and trying to recover. Until 2003, Trump urged his brothers to sell his late father's property. Even though it is very contrary to his father's message. After that the business continued to fail: In 2004, Trump Hotels and Casino Resorts filed for bankruptcy with $ 1.8 billion in debt.

But Trump eventually made a comeback, and according to several sources with knowledge of Trump’s business, foreign money played a large role in reviving his fortunes, in particular investment by wealthy people from Russia and the former Soviet republics. This conclusion is buttressed by a growing body of evidence amassed by news organizations, as well as what is reportedly being investigated by Special Counsel Robert Mueller and the Southern District of New York. It is a conclusion that even Trump’s eldest son, Donald Trump Jr., has appeared to confirm, saying in 2008—after the Trump Organization was prospering again—that “Russians make up a pretty disproportionate cross-section of a lot of our assets.” "

Former Trump longtime architect Alan Lapidus said that based on what he knows from the inner workings of the organization, following Trump's previous financial troubles, “he can't ask anyone in the United States to lend him anything. It's all out of Russia. His involvement with Russia is deeper than he admits. "

The foreign money initially came in the form of new real-estate partnerships and the purchase of many of Trump's condos, said Trump's former real estate partner who witnessed the transformation of the years and was then disappointed in Trump. "I think part of that is him poisoning the bank. I think he might also find out that personal guarantees [on loans] are not a brilliant idea either, "said a former business partner. “So he was saying to himself, ‘What else could I do in the world? I’ll just convince people to buy my brand.’ And the only people who were willing to buy it were tasteless Russians, people who like the absurd, ostentatious gold-leaf lifestyle he has. You’re not going to sell that brand to blue bloods in Greenwich, Connecticut.”


Or as another Trump biographer Gwenda Blair put it: “Trump is on the Titanic going down. Everyone drowns around him. … Suddenly he was saved. It is almost like a spaceship landing right next to its place in the water. "
Posted by Erizeli Bandaro at 12:26 PM