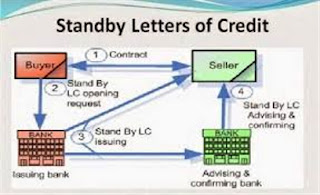 The standby letter of credit is quite flexible. ISP98 offers the following descriptive list, however, keep in mind that this is only a convenience list and can be expanded as needed depending on the specific functionality or application required.

The standby letter of credit is conditioned on default or non-performance by the applicant, the party having the credit issued by his bank to the recipient. These instruments are, by themselves, non-negotiable and the obligations they represent are not easily transferable. ICC 500 Article 48 b, states "Credit is transferable only if expressly designated as" transferable "by the issuing bank" and, c, "The Sending Bank is under no obligation to make such a transfer except to the extent and in a manner expressly agreed by the bank. . "

ISP98 Rule 6.02 states "a. Standby is not transferable unless stated so, b. A standby stating that it is transferable without further provisions means that the right to withdraw: i. can be transferred as a whole more than once, ii. partially transferable, and iii. cannot be transferred unless the issuer (including confirmer) or someone else specifically designated on standby agrees and affects the transfer requested by the recipient.

Like the bank guarantees described above, fraudsters will often sell standby letters of credit to uninformed parties for a small percentage of their face value. It has never been disclosed that the credit is no longer valid because the applicant has fulfilled his obligations to the recipient. Another facet of the fraud scheme is offering investment opportunities through standby letters of credit and independent bank guarantees. Bear in mind that these instruments are out of date and in themselves non-negotiable, and, furthermore, the obligations they represent are not transferable immediately.

Fraudsters will claim that this instrument is discounted, has a coupon attached and pays interest. None of this is true! These instruments cannot be bought, sold or traded and there is absolutely no secondary market in which they can be traded. Any investment program that claims investing in a discount standby letter of credit is a scam.
Posted by Erizeli Bandaro at 2:34 AM