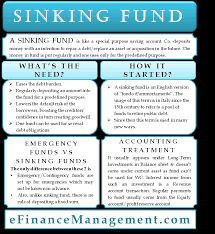 First, understand that a sinking fund provision is really just a pool of money set aside by a corporation to help repay a bond issue. Typically, bond agreements (called indentures ) require a company to make periodic interest payments to bondholders throughout the life of the bond, and then repay the principal amount of the bond at the end of the bond's lifespan.

For example, let's say Cory's Tequila Company (CTC) sells a bond issue with a $1,000 face value and a 10-year life span. The bonds would likely pay interest payments (called coupon payments) to their owners each year. In the bond issue's final year, CTC would need to pay the final round of coupon payments and also repay the entire $1,000 principal amount of each bond outstanding. This could pose a problem because while it may be very easy for CTC to afford relatively small $50 coupon payments each year, repaying the $1,000 might cause some cash flow problems, especially if CTC is in poor financial condition when the bonds come due. After all, the company may be in good shape today, but it is difficult to predict how much spare cash a company will have in 10 years' time.

To lessen its risk of being short on cash 10 years from now, the company may create a sinking fund, which is a pool of money set aside for repurchasing a portion of the existing bonds every year. By paying off a portion of its debt each year with the sinking fund, the company will face a much smaller final bill at the end of the 10-year period. As an investor, you need to understand the implications a sinking fund can have on your bond returns. Sinking fund provisions usually allow the company to repurchase its bonds periodically and at a specified sinking fund price (usually the bonds' par value) or the prevailing current market price. Because of this, companies generally spend the dollars in their sinking funds to repurchase bonds when interest rates have fallen (which means the market price of their existing bonds have risen), as they can repurchase the bonds at the specified sinking fund price, which is lower than the market price.