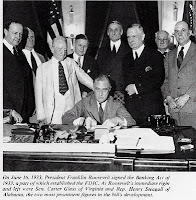 The Banking Act of 1933, widely known as the Glass-Steagall Act of 1933, separated banking according to the types of banking business - commercial banking and investment banking. It was passed when a large portion of the U.S. banking system collapsed during the Great Depression in the 1920s and 1930s.

History and Meaning of Glass-Steagall Act The stock market crashed in the U.S. in 1929. That was, essentially, the beginning of the Great Depression. Very similar to the beginning of the Great Recession in 2008, the stock market had reached new highs before 1929 driven by speculation. The Glass-Steagall Act was a reaction to the fact that banks, before the Great Depression, had mixed the commercial and investing activities and regulators felt that this had caused some of the problems. In other words, mixing the commercial and investment banks functions caused banks to take too much risk with depositors' money.. Banks were accused of being greedy....taking on too much risk with depositors' money in hopes of scoring big investment rewards.

After the enactment of Glass-Steagall, commercial banks could accept depositor's money and make loans but could not become involved in selling or trading securities or underwriting. They certainly could not trade in risky or speculative financial instruments. Investment banks could underwrite securities and sell securities, but they could not accept bank deposits or make loans to customers. Glass-Steagall had other provisions. Banks could not pay market interest rates on deposits, for example.

Why the Separation between Commercial and Investment Banks? Some lawmakers in the early 1930's, during the Great Depression, felt that risky activities by banks had contributed to the crash of the stock market and the Great Depression itself. Depositors' money was used for speculative trading. Depositors' money, as a result, was lost. As a result, two Democratic lawmakers, Senator Carter Glass of Virginia and Henry Steagall of Alabama sponsored bills which became known as the Glass-Steagall Act of 1933.

The thinking was that separating the powers of commercial and investment banks would protect depositors' money and it did until the Glass-Steagall Act was repealed in 1999 by the Gramm-Leach-Bliley Act. The Gramm-Leach-Bliley Act was passed along party lines by a Republican vote in the Senate. The banking industry had been lobbying for the repeal since the 1980s. One of the arguments for repealing the Glass-Steagall Act was that the banking industry was losing market share to securities firms. Another was that the securities activities the banks were seeking were low risk by their nature and could provide diversification for the banks. Obviously, the types of risky, exotic securities like credit default swaps had not been thought of at that time.

The FDIC examines and supervises member banks for safety and soundness and supervises failed banks. Like the Glass-Steagall Act, the FDIC grew out of the events of the Great Depression. Because there was no deposit insurance at that time, there were bank runs. Depositors fled to banks when the Depression hit to try to withdraw their money. This made the Depression worse. When 2008 came and the Great Recession occurred, the FDIC increased its depositor insurance amount to $250,000 from $100,000 per bank per depositor to increase consumer confidence. That limit will expire at the end of 2013 and will revert back to $100,000.

The Volcker Rule, at least according to Obama's first thoughts, would stop banks from playing the market with depositors' money, participating in hedge funds and making private equity investments. In addition, there would be no more mergers between big banks. The thinking is still fluid on this rule, so nothing is certain yet. However, the Volcker rule or something like it would end the "too big to fail" mentality and clean up the banks. It just might save us from another financial crisis.
Posted by Erizeli Bandaro at 8:56 PM